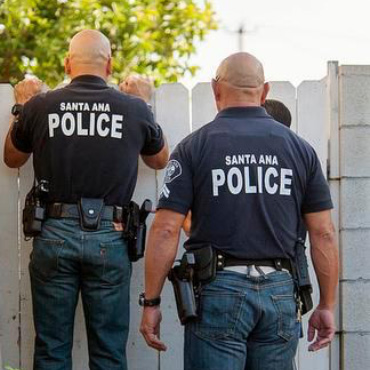 The record in this case reflects the following facts. The police department received an anonymous tip that the petitioner, James Sarantopoulos, had marijuana in his home and that marijuana was growing in his backyard. Based on that information, two police officers went to his residence to verify the information. Upon arrival, the officers discovered that Sarantopoulos’ backyard was surrounded by a wooden board-on-board fence that was six feet high. In attempting to look over the fence, the officers entered an adjoining neighbor’s unfenced yard. The officers did not obtain the neighbor’s permission to enter the property. Although the officers could not see through the fence enclosing Sarantopoulos’ backyard, one of the officers was able to see over the fence by standing on his tiptoes. From that position he observed several marijuana plants growing in five-gallon buckets. Based on this observation and the anonymous tip, the officers obtained a search warrant and proceeded to search Sarantopoulos’ residence and backyard. More than twenty grams of marijuana was seized as a result of the search, and Sarantopoulos was charged with possession and manufacturing of marijuana and possession of diazepam.

Sarantopoulos, by building a solid six-foot fence, has created his zone of privacy from persons in adjoining yards attempting to peer into his yard from six feet or lower. Sarantopoulos has not created a zone of privacy from a neighbor’s observations over the fence if that neighbor is seven feet tall. He also has not created a zone of privacy for a person in an adjoining yard standing on a ladder trimming trees or repairing a roof, as the Supreme Court recognized in California v. Ciraolo, 476 U.S. 207, 106 S. Ct. 1809, 90 L. Ed. 2d 210 (1986). A property owner reasonably should foresee that neighbors or other persons on the adjoining land may use devices which place those persons in a position to view over a six-foot fence. Further, as Sarantopoulos acknowledges, the Supreme Court has recognized that it would not be an unlawful search for law enforcement to fly over his property and view the backyard, so long as law enforcement does not *123 violate any laws or Federal Aviation Administration (FAA) regulations. See Florida v. Riley, 488 U.S. 445, 109 S. Ct. 693, 102 L. Ed. 2d 835 (1989).Sarantopoulos, 604 So. 2d at 554. Additionally, relying on the United States Supreme Court’s decision in United States v. Dunn, 480 U.S. 294, 107 S. Ct. 1134, 94 L. Ed. 2d 326 (1987), the district court found that the officers’ civil trespass on the adjoining neighbor’s property to look over Sarantopoulos’ fence did not make the search illegal.

Sarantopoulos asserts that this Court should follow the Fourth District’s decision in West. He argues that, under the facts of this case, his expectation of privacy is reasonable and clearly satisfies the second prong of the Katz test because, as found by the trial judge, “extraordinary efforts” were used to overcome his reasonable attempts to maintain his privacy. Sarantopoulos also contends that, because the officers had no right to be on the neighbor’s adjoining property, they were trespassers and were not in a legal position to look onto his property. Consequently, he maintains that the search was illegal.

We agree with the findings of the district court and hold that, under the second, objective prong of Katz, Sarantopoulos failed to create a reasonable zone of privacy in his backyard, given that his backyard was protected from view only as to those who remained on the ground and who were unable to see over the six-foot fence unaided.[2] Additionally, we reject Sarantopoulos’ contention that the purported civil trespass of the officers made the search illegal. As the district court noted:

We are aided in [the conclusion that the officers’ entry into the neighbor’s yard, without permission, did not violate Sarantopoulos’ constitutionally protected right to privacy] by the Supreme Court’s case of United States v. Dunn, 480 U.S. 294, 107 S. Ct. 1134, 94 L. Ed. 2d 326 (1987). In Dunn, government agents, without a warrant, entered the defendant’s property by climbing a perimeter fence, walked one-half mile, crossed several barbed wire fences, climbed a wooden fence enclosing the front of a barn, and peered through fishnet to determine that contraband was located inside the barn. Although the barn was not within the curtilage of a nearby home, obviously the officers were trespassing upon the defendant’s property to observe the contents of the barn. The Supreme Court upheld the government’s actions to make observations in the face of the government trespass upon the defendant’s land, concluding that the open fields doctrine permitted such law enforcement activity. Further in [Oliver v. United States, 466 U.S. 170, 104 S. Ct. 1735, 80 L. Ed. 2d 214 (1984)], the majority of the Supreme Court rejected Justice Marshall’s desire to adopt a rule that “[p]rivate land marked in a fashion sufficient to render entry thereon a criminal trespass under the law of the State in which the land lies is protected by the Fourth Amendment.” [Oliver, 466 U.S. at 195, 104 S. Ct. at 1750]. Therefore, in this case the officers’ civil trespass on adjoining land to look into the curtilage of Sarantopoulos’ home should not make the search illegal.Sarantopoulos, 604 So. 2d at 555-56. We acknowledge that the United States Supreme Court’s decision in Dunn turned on the open fields doctrine and the fact that the barn was not within the curtilage of the defendant’s home; neither of those factors is present in this case. Nevertheless, the Court emphasized in Dunn that, even if the barn did enjoy Fourth Amendment protection and even if the officers had no permission to be on the defendant’s property, the subsequent seizure was not illegal because the officers merely looked into the barn and never actually entered the barn. Given the United States Supreme Court’s ruling in Dunn, we are compelled to find, under the provisions of article I, section 12, of the Florida Constitution, that the officers’ trespass in this case did not make the search illegal.

It is so ordered.

GRIMES, J., concurs with an opinion, in which McDONALD and HARDING, JJ., concur.

SHAW, J., concurs in result only.

BARKETT, C.J., dissents with an opinion, in which KOGAN, J., concurs.

KOGAN, J., dissents with an opinion, in which BARKETT, C.J., concurs.

The dissenting opinion laments that our holding permits the police to look over a privacy fence to see whether marijuana is being grown in the back yard. The dissent fails to mention that the same principle would apply if the police had looked over the fence and witnessed a murder. While Sarantopoulos no doubt intended to grow his marijuana in private, his expectation of privacy was not one that society is prepared to honor. California v. Ciraolo, 476 U.S. 207, 106 S. Ct. 1809, 90 L. Ed. 2d 210 (1986). There was no physical invasion of his property until the police obtained a valid search warrant as required by State v. Rickard, 420 So. 2d 303 (Fla. 1982). I see nothing wrong with the proposition that a person who commits a crime in a fenced back yard runs the risk of being observed.

I cannot believe that American citizens sitting on porches or in their backyards are not constitutionally protected when government agents, acting only on an anonymous tip, climb on ladders or stretch on tiptoes to peer over privacy fences.

It is true that marijuana plants were found in the backyard in this instance. However, what we must remember is that in order to admit the marijuana into evidence, we must approve the process that permits peeping over the fences of perfectly law-abiding citizens whenever any anonymous tipster, either deliberately or inadvertently, conveys a false charge. There will be no redress for those citizens. Conversely, there is adequate law to assure that the homes where criminal activity is occurring can be entered whenever there is sufficient cause to do so, which includes assessing the reliability of the “tip.” See Illinois v. Gates, 462 U.S. 213, 103 S. Ct. 2317, 76 L. Ed. 2d 527 (1983).[3]

The willingness to allow an intrusion like this, instigated only by an anonymous tip, in order to admit evidence is a poor bargain for freedom-loving people and, more importantly, deliberately ignores the mandates of our Florida and federal constitutions.

The majority itself notes that the Dunn opinion is distinguishable from the present case, because the facts are significantly different. That being the case, I see no reason why we are required to extend that holding to wholly different facts. Moreover, I find that the Constitution affords a right for citizens to be secure within the curtilage of their homes. This right is reasonable and legitimate and should be recognized as valid. Accordingly, I would quash the opinion below and approve the decision in West.

[2] For example, the observing officer in this case was 6 feet 2 inches tall and he was able to see over the fence unaided.

[3] Justice Grimes’ concurring opinion misses the point that it is the law-abiding citizens who need to be protected from government agents peeping into their yards. Are we to permit law enforcement officers to peep and peer indiscriminately into private property on the off chance that they may witness some crime? I am not willing to accept such widespread intrusions on the basis of nothing more than an anonymous tip. This does not mean, however, that a law enforcement officer who is legitimately in a particular place may not respond when he or she witnesses any crime, whether it be a murder or the cultivation of illegal drugs.